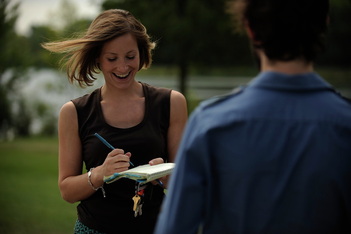 Caption: Mrs. Badalamente interviews a local film director in Midland. During the summer of 2010, Badalamente (formally O'Connor)  worked at the Midland Daily News as a local reporter. Here is the link for the story she wrote after this interview: Movie Maker.

Here is one of her favorite articles she wrote: Opening doors for Alan.

For more stories see Mrs. Badalamente's scrap book for ALL of the stories, pictures and layouts at school.
You can email Mrs. Badalamente at badalamentes@aaps.k12.mi.us (phone will be on silent during instruction time please leave a message and I will get back to you within 48 hours; email will be quicker).